Guide of Nosy Be

Located off the northwestern coast of Madagascar, in the heart of the Mozambique Channel, the island of Nosy Be and its neighboring islands are home to the best diving spots for all levels of the country.

From Nosy Be to Nosy Sakatia

Between Nosy Be and Nosy Sakatia, there are some diving spots that can satisfy all tastes. For those who want to dive on wrecks, there is a 26 to 29 meter deep site with medium visibility and thousands of fish.

Located off Nosy Be, Shark Point is a drop of 18 to 50 meters deep of great visibility where it is possible to swim with reef sharks, manta rays, mobula.

In Manta Point, divers are most interested in manta rays, some of which are more than 5 meters tall, patrolling the waters of this site.

In the region, there is also a site suitable for the observation of sea fans with an average visibility of depth ranging from 13 to 20 meters.

It is not uncommon to see giant turtles, seahorses, crocodile fish ...

In Nosy Iranja, the main diving spot is especially for experienced divers of N2 and N3 levels. This drop can reach up to 70 meters deep but there is also a beginner accessible area from a depth of 15 to 20 meters. Species that ply its waters include leopard sharks and tip-white sharks.

In Nosy Komba, the site abounds with an impressive number of fish that visibility is even affected. Her sponges and corals are also wonderful. Its seabed is one of the richest in the country.

Another marvel of the region, Nosy Tanikely is a magnificent paying reserve teeming with fish of all colors. Dolphins, various species of turtles, groupers, barracudas, lobsters, snappers, jacks, antennae fish, leopard sharks ... Offering an excellent visibility, this spot of a depth of up to 23 meters is accessible to all levels . Remember: fishing is prohibited here.

Categories in Nosy Be 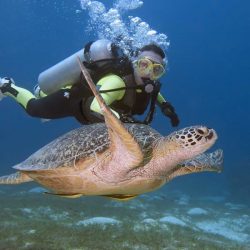 Activity proposed by Adventure Blue Vision
The first dive, the one from which you will go out with the eyes that sparkle following the meeting of the marine fauna and will make you a regular diver! 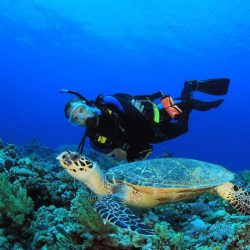 The best scuba diving sites in Nosy Be

Activity proposed by Oceane's Dream
The Nosy Tanikely Nosy Be Marine Park, "the big island", is an island off the coast of ... 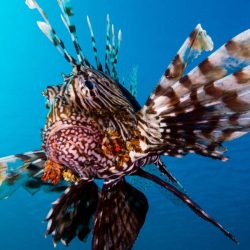 Scuba diving at Nosy Be

Activity proposed by Oceane's Dream
Located in the Mozambique Channel, Nosy Be offers a wide range of beautiful underwater sites conducive to diving .... 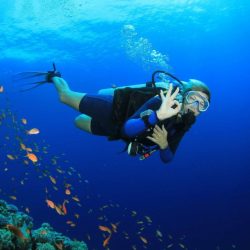 5 unknown dive spots in Nosy Be

Activity proposed by Adventure Blue Vision
If diving is a must in Nosy Be for all lovers of marine life, we usually go to the southern spots because all the clubs are nearby. A lonely club, Adventure Blue Vision, decided to settle in the North and thus offers spots where no one goes! 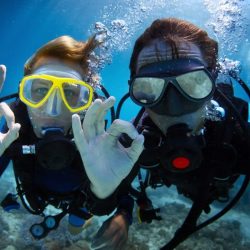 Other destinations in Nosy Be